The Little Rock Regional Chamber is pleased to announce that Jack Thomas has been named Vice-President of Economic Development. Jack will lead all economic development work for the chamber including new business recruitment as well as existing business expansion and retention.

Will Faulkner has been named Director of Business Retention and Expansion. In this role, Will will be supporting the chamber’s MetRock 2020 economic development strategy and assistance to the region’s existing businesses by building relationships with key partners at local, regional and state levels.

The Little Rock Regional Chamber is pleased to announce that Kellen Davis has been named Executive Director of the Leadership Greater Little Rock program. Kellen will be responsible for helping identify potential leaders in businesses, nonprofits and government and providing them with the tools and motivation to become involved in the decision-making process in their communities.

For the past 3 years Kellen has been working for Heart of Arkansas United Way in fundraising, corporate relations and mostly recently as Director of Development and Volunteer Engagement.

Minority businesses play a critical role in our economy and the Little Rock Regional Chamber wants to recognize those going above and beyond to make a positive impact in their community. Nominations are currently being accepted for the 2022 Minority Enterprise Development (MED) Week Awards.

In honor of its 40th anniversary, MED Week will be filled with unique events and networking opportunities designed to celebrate the outstanding achievements of minority entrepreneurs while also providing tools and opportunities for all minority business owners to grow and expand.

The Little Rock Regional Chamber is pleased to announce the promotion of Stacy Wilson as its new Chief Revenue Officer. Stacy has recently served as the chamber’s Director of Programs and Investor Development, leading the events portfolio, programming, and membership departments for the chamber.

As Director of HR & Talent Initiatives, Kristi Barr is expanding her role with the Academies of Central Arkansas and talent pipeline creation for employers while also adding human resources duties for chamber staff.

SCORE mentors are available at the chamber every first and third Tuesday of the month from 2:00 p.m. to 4:00 p.m. A small business or aspiring small business can meet with a  mentor in thirty-minute increments during the two-hour period. The chamber is offering these sessions free of charge. To set your appointment, please call 501.374.2001.

Revolution, parent company of Delta Plastics, announced plans today for a 36,000 sq. ft expansion of their 100,000 sq. ft manufacturing facility in Little Rock, AR. Revolution expects to create over 60 new jobs for the state of Arkansas in addition to the company’s existing 290 jobs within the next two years from this investment, while also increasing their ability to provide film products and circular solutions aligned with its corporate mission and strategy.

LECCO, Italy, and LITTLE ROCK, Ark. (July 29, 2020) – Fiocchi of America, the United States subsidiary of Italy-based Fiocchi Group, today announced plans to establish a new manufacturing facility in Little Rock, Ark. Fiocchi, a global leader in small-caliber ammunition, will invest $15 million to establish a fully-independent industrial platform in the U.S. Fiocchi has identified the U.S. as key to boosting the company’s growth.

LITTLE ROCK, Ark. (July 21, 2020) – SCA Pharma, an FDA-registered outsourcing facility, today announced that it will expand its operations in Little Rock. SCA will be investing more than $10 million and will create the opportunity to double its current Little Rock workforce of 180 people.

Local, state and federal leaders gathered today for a groundbreaking ceremony on new transportation infrastructure at the Port of Little Rock. Construction has now begun to widen and improve Zeuber Road to meet heavy industrial standards in anticipation of two new companies locating there.

After a nationwide search, Alleviant Health Centers decided to expand their headquarters in their hometown of Little Rock. An operator of mental health clinics across the United States, Alleviant provides a combination of traditional therapies and innovative, holistic methods for their patients.

Arcturus Aerospace, an aerospace manufacturer located in California, announced today it will be relocating its operations to Little Rock. Veteran-owned and operated, Arcturus Aerospace is an AS9100D certified operation that provides both quality and on-time delivery of CNC machined parts to aircraft manufacturers.

The Little Rock Regional Chamber joins public health officials in supporting our city, state and nation's efforts to minimize the spread of the COVID-19 virus through recommended practices of social distancing. While we each do our part in minimizing the impact this virus will have on our health, the economic health of our community and nation is also at risk.

Priority1 announced Thursday it plans to add 100 jobs in Little Rock by the end of the year. The logistics company also said it would add another 100 jobs at operations across the nation.

Following a competitive search, Express Rx, a pharmaceutical retailer with stores across the southeastern U.S., has decided to locate its new headquarters in Little Rock. To keep pace with its national expansion, the company expects to create 24 new high-paying jobs.

LITTLE ROCK, Ark. September 18, 2019 – The Venture Center and the Little Rock Regional Chamber today announced the inaugural Spark! Cohort at a kickoff ceremony held at The Venture Center.  Spark! is a pre-accelerator program offering free office space in The Venture Center, while providing mentorship and training to launch the cohort’s businesses to the next level of growth.

The Venture Center and the Little Rock Regional Chamber Team Up for Spark!

LITTLE ROCK, AR (July 1, 2019) – The Metro Little Rock Alliance (MLRA) has launched a new brand and website to market the 12-county region to corporate executives, site selection consultants and potential new residents as a prime location to do business and live in Central Arkansas.

Chamber to Partner with SCORE

Little Rock celebrated two FinTech announcements in October. On October 25, Gas Pos, a new technology platform for the fuel business, announced that it has relocated its headquarters to North Little Rock from Birmingham, Alabama. As part of the relocation ...

In 2011, the citizens of Little Rock overwhelmingly passed a sales tax initiative for the community. As a part of the initiative, the Little Rock Port Authority received $10 million dollars to purchase land for industrial development and job creation ...

Immigrants in the Little Rock metro area contributed $2 billion to the region’s GDP, and paid $157.8 million in federal taxes and $83.8 million in state and local taxes, according to a new research brief released by New American Economy (NAE) in part ...

The Little Rock Regional Chamber is pleased to announce that Ben France has been named Vice President of Economic Development. In this capacity Ben will lead all economic development work for the chamber including new business recruitment as well as ...

Ready to relocate or expand? 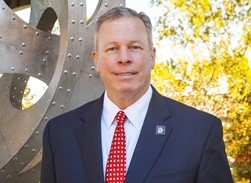 The Little Rock region is home to many large employers in a variety of industries. Government, healthcare, manufacturing/distribution and banking/finance are the top employers. Little Rock has seen a growth in FinTech and tech-related companies.

If you have questions about how the chamber can help your business or how you can get involved in growing our regional economy, drop us a line.